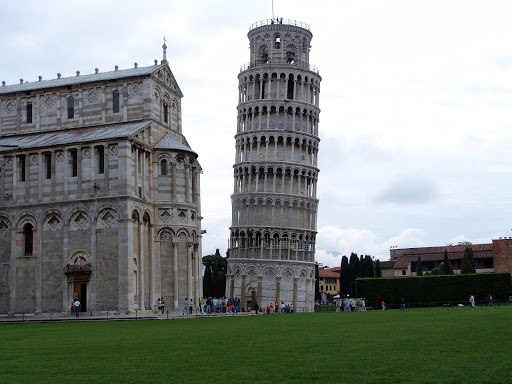 The Leaning Tower of Pisa or simply the Tower of Pisa is the campanile, or freestanding bell tower, of the cathedral of the Italian city of Pisa, known worldwide for its nearly four-degree lean, the result of an unstable foundation. The tower is situated behind the Pisa Cathedral and is the third-oldest structure in the city's Cathedral Square, after the cathedral and the Pisa Baptistry. The height of the tower is 55.86 metres (183.27 feet) from the ground on the low side and 56.67 metres (185.93 feet) on the high side. The width of the walls at the base is 2.44 m (8 ft 0.06 in). Its weight is estimated at 14,500 metric tons (16,000 short tons). The tower has 296 or 294 steps; the seventh floor has two fewer steps on the north-facing staircase. The tower began to lean during construction in the 12th century, due to soft ground which could not properly support the structure's weight, and it worsened through the completion of construction in the 14th century. By 1990 the tilt had reached 5.5 degrees. The structure was stabilized by remedial work between 1993 and 2001, which reduced the tilt to 3.97 degrees.

Construction :
Construction of the tower occurred in three stages over 199 years. On 5 January 1172, Donna Berta di Bernardo, a widow and resident of the house of dell'Opera di Santa Maria, bequeathed sixty soldi to the Opera Campanilis petrarum Sancte Marie. The sum was then used toward the purchase of a few stones which still form the base of the bell tower.
On 9 August 1173, the foundations of the tower were laid. Work on the ground floor of the white marble campanile began on 14 August of the same year during a period of military success and prosperity. This ground floor is a blind arcade articulated by engaged columns with classical Corinthian capitals. Nearly four centuries later Giorgio Vasari wrote: "Guglielmo, according to what is being said, in the year 1174, together with sculptor Bonanno, laid the foundations of the bell tower of the cathedral in Pisa". The tower began to sink after construction had progressed to the second floor in 1178. This was due to a mere three-metre foundation, set in weak, unstable subsoil, a design that was flawed from the beginning. Construction was subsequently halted for almost a century, as the Republic of Pisa was almost continually engaged in battles with Genoa, Lucca, and Florence. This allowed time for the underlying soil to settle. Otherwise, the tower would almost certainly have toppled. On 27 December 1233, the worker Benenato, son of Gerardo Bottici,
oversaw the continuation of the tower's construction.
Posted by Akash Bondar at 12:40 PM