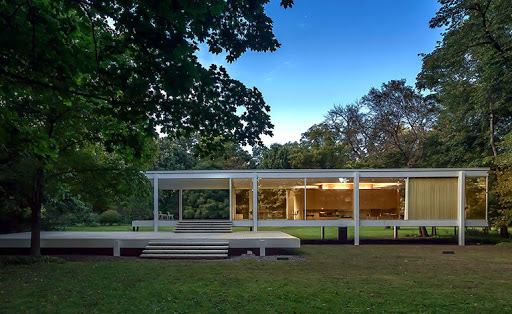 Located in a once-rural setting, 55 miles (89 km) southwest of Chicago, estate adjoining the Fox River, in the city of Plano, Illinois.

Ludwig Mies van der Rohe, born Maria Ludwig Michael Mies (March 27, 1886 – August 17, 1969) was an architect and designer. Mies has long been considered one of the most important architects of the 20th century. In Europe, before World War II, Mies emerged as one of the most innovative leaders of the Modern Movement, producing visionary projects and executing a number of small but critically significant buildings. After emigrating to the United States in 1938, he transformed the architectonic expression of the steel frame in American architecture and left a nearly unmatched legacy of teaching and building. Born in Aachen, Germany, Mies began his architectural career as an apprentice at the studio of Peter Behrens from 1908 to 1912. There he was exposed to progressive German culture, working alongside Walter Gropius and Le Corbusier.

One of Mies’ most famous aphorisms was “less is more”. For many, the architecture of Farnsworth House represents the ultimate refinement of his minimalist beliefs. It was designed and constructed between 1945 and 1951 as a oneroom weekend retreat, located in a once-rural setting, 55 miles (89 km) southwest of Chicago on a 60-acre (240,000 m2 ) estate adjoining the Fox River, in the city of Plano, Illinois. The steel and glass house was commissioned by Dr. Edith Farnsworth, a prominent Chicago medical specialist, as a place where she could engage in her hobbies: playing the violin, translating poetry, and enjoying nature. Farnsworth was highly intelligent, articulate, and intent on building a very special work of modern architecture. Her instructions for Mies were to design the house as if it were for himself.

Mies created a 1,585-square-foot (140 m2 ) house that is now widely recognized as an iconic masterpiece of the International Style of architecture. The home was designated a National Historic Landmark in 2006 after being added to the National Register of Historic Places in 2004. It is currently owned and run as a house museum by the National Trust for Historic Preservation. Like many Modernists, Mies worshiped the technology-driven modern era he lived in, but also believed that reconnecting the individual with nature was one of the greatest challenges faced by an urbanized society.. With this in mind, Mies conceived Farnsworth House as an indooroutdoor architectural shelter simultaneously independent of and intertwined with the nature around it. The simple elongated cubic form of the house runs parallel to the flow of the river and is anchored to the site in the cooling shadow of a large and majestic black maple tree. To underline the strong connection with nature, the house was deliberately built on the flood plain near the river’s edge instead of on the flood-free upland portions of the site.

The essential characteristics of the house are immediately apparent. The extensive use of clear floor-to-ceiling glass opens the interior to its natural surroundings to an extreme degree. Two distinctly expressed horizontal slabs, which form the roof and the floor, sandwich an open space for living. The slab edges are defined by exposed steel structural members painted pure white. The house is elevated five feet three inches (1.60 m) above the flood plain by eight steel columns, which are attached to the sides of the floor and ceiling slabs. The end of the slabs extend beyond the column supports, creating cantilevers. The house seems to float weightlessly above the ground it occupies. A third floating slab, an attached terrace, acts as a transition between the living area and the ground. The house is accessed by two sets of wide steps connecting the ground to the terrace and then to the porch. As was often the case with Mies’ designs, the entrance is located on the sunny side, facing the river instead of the access road.