The Burj Khalifa, known as the Burj Dubai , is a skyscraper in Dubai, United Arab Emirates. With a total height of 829.8 m and a roof height of 828 m. The Burj Khalifa has been the tallest structure and building in the world since its topping out in 2009. 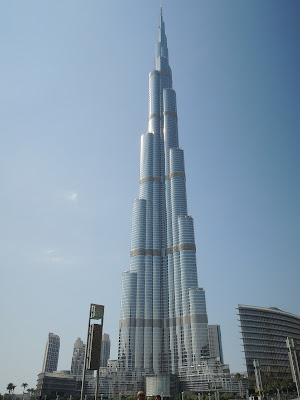 Outside, WET Enterprises designed a fountain system at a cost of 800 million. Illuminated by 6,600 lights and 50 coloured projectors, it is 270 m (900 ft) long and shoots water 150 m (500 ft) into the air, accompanied by a range of classical to contemporary Arabic and other music. It is the world's second largest choreographed fountain. On 26 October 2008, Emaar announced that based on results of a naming contest the fountain would be called the Dubai Fountain.

Burj Khalifa is surrounded by an 27-acre park designed by landscape architects SWA Group. Like the tower, the park's design was based on the flower of the Hymenocallis, a desert plant. At the centre of the park is the water room, which is a series of pools and water jet fountains. Benches and signs incorporate images of Burj Khalifa and the Hymenocallis flower. The plants are watered by water collected from the building's cooling system. The system provides 68,000,000 L annually. WET Enterprises, who also developed the Dubai Fountain, developed the park's six water features.

Construction Highlights :
Over 45,000 m3 of concrete, weighing more than 110,000 tonnes were used to construct the concrete and steel foundation, which features 192 piles buried more than 50 m (164 ft) deep. Burj Khalifa's construction will have used 330,000 m3 of concrete and 39,000 tonnes of steel rebar, and construction will have taken 22 million man-hours.
The exterior cladding of Burj Khalifa began in May 2007 and was completed in September 2009. The vast project involved more than 380 skilled engineers and on-site technicians. At the initial stage of installation, the team progressed at the rate of about 20 to 30 panels per day and eventually achieved as many as 175 panels per day. The tower accomplished a world record for the highest installation of an aluminium and glass façade with a height of 512 metres.
The total weight of aluminium used on Burj Khalifa is equivalent to that of five A380 aircrafts and the total length of stainless steel bull nose fins is 293 times the height of Eiffel Tower Paris. In November 2007, the highest reinforced concrete core walls were pumped using 80 MPa concrete from ground level. A vertical height of 601 metres.
This smashed the previous pumping record on a building of 470m on Taipei 101; the world’s second tallest tower and the previous world record for vertical pumping of 532 metres for an extension to the Riva del Garda Hydroelectric Power Plant in 1994. The concrete pressure during pumping to this level was nearly 200 bars. The amount of rebar used for the tower is 31,400 metric tons laid end to end this would extend over a quarter of the way around the world.
Burj Khalifa Construction Timeline:
January 2004 : Excavation started
February 2004 : Piling started
March 2005 : Superstructure started
June 2006 : Level 50 reached
January 2007 : Level 100 reached
March 2007 : Level 110 reached
April 2007 : Level 120 reached
May 2007 : Level 130 reached
July 2007 : Level 141 reached (world's tallest building)
September 2007 : Level 150 reached (world's tallest free-standing  structure)
April 2008 : Level 160 reached ( world's tallest man-made  structure)
January 2009 : Completion of spire (Burj Khalifa tops out)
September 2009 : Exterior cladding completed
January 2010 : Official launch ceremony
Posted by Akash Bondar at 5:57 AM No comments: