INTRODUCTION :
Staircases provide means of movement from one floor to another in a structure. Staircases
consist of a number of steps with landings at suitable intervals to provide comfort and safety for the users. 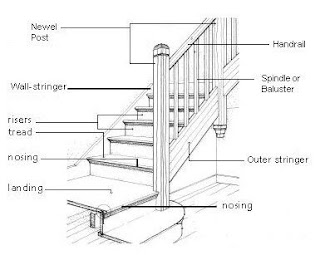 R.C.C. STAIRS :
The various advantages of reinforced concrete stairs are given below :
• They have requisite fire resisting qualities to a great extent
• They are durable,strong, pleasing in appearance and can be easily rendered non-slippery.
• They can be designed for greater widths, longer spans and any height.
• They can be moulded in any desired form to suit the requirements of the architect.
• They can be easily cleaned.
• The cost of maintenance is almost nil.
• They can be pre-cast or cast-in-situ.

1) SINGLE STRAIGHT FLIGHT STAIRS:
Although simple in design and construction, is not popular because of the plan space it occupies          The flight behaves as simply supported slab, spanning from landing to landing.
The effective span/total horizontal going is usually taken as landing edge to edge by providing a down stand edge beam to each landing.  If these edge beams are not provided, the effective span would betaken as overall of the landings, resulting in a considerably increased bending moment and hence more reinforcement. 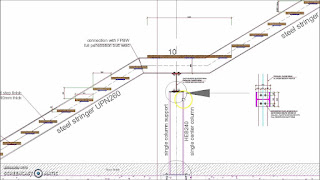 INCLINED SLAB STAIRS WITH HALF SPACE LANDINGS :
This type of stairs gives more compact plan layout and better circulation than the single straight flight stairs.  The half space or 180o turn landing is introduced at the midpoint of the total rise, giving equal flight spans, thus reducing the effective span and hence reducing bending moment considerably.  In most designs, the landings span crosswise on to a load bearing wall or beam and the flights span from landing to landing.

STRING BEAM STAIRS :
In this category, the slab is supported on one side by side wall  side by a stringer beam  I.e. a string or edge beam is used to span from landing to landing to resist bending moment with the steps spanning horizontally.  In this case, the waist slab is thinner and an overall saving in the concrete volume required can be achieved, but this saving in material is usually offset by the extra formwork cost required for string beam.  The string beam can be either up stand or down stand in format and can be on both sides if stairs are free standing.  Each step is designed as spanning horizontally with the bending moment equal to wll/8, where w is the uniformly distributed load per unit area on the step, inclusive of the self weight.  Sometimes, for wider steps, a central string beam spanning between the end walls or column is provided on which the stairs slab is supported.  The waist slab is designed as slab cantilevering from both the sides of the string beam.

CANTILEVER STAIRS:
They are also called spine wall stairs.  They consist of a central vertical wall from which the Space the flights and half space landing are cantilevered.  The wall provides a degree of fire resistance between the flights and is therefore used mainly for the escape stairs.  Since both flights and landings are cantilevered the reinforcement is placed in the top of the flight slab and in the upper surface of the landing to counteract the induced negative moment.  The plan arrangement can be a single straight flight or two flights with half space landings.

R.C.C.SPIRAL STAIRS :
Mainly used as accommodation stairs in the foyers of prestige buildings such as theatres, banks, commercial complexes etc.  Can be expensive to construct- normally at least seven times the cost of conventional stairs.  The plan shape is generally based on a circle; it is also possible to design an open spiral stair with an elliptical core, which is known as helical stairs. The spiral an be designed around a central large diameter circular  column, where the steps are cantilevered from that, or in case of helical stairs, can be designed as open circular well.  A large amount of steel reinforcement is used to resist the bending moment, shear force and torsional moment.  The continuous slab varies in thickness from top to bottom- less at top and increasing at the bottom.  There are two or three sets of reinforcement with top and bottom layer in each:  Continuous bars running the length of the spiral  Cross or radial bars  Diagonal bars laid tangential in two directions to the inner curve. 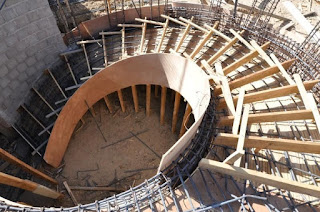 PRE-CAST STAIRS :
Most of the concrete stair arrangements are possible to produce as precast concrete components which can be:
• Individual steps units
• Complete flight with number of steps required

TOP:
In situ concrete staircase, the stairs are supported on soft pads at discrete points, a joint separate wall and stair.
MIDDLE:
Cast-in place concrete stair shaft with prefabricated stair flights, the bottom and top support for the flight include sound insulation, the landings are laterally supported on soft pads, flights separated from wall by a joint.
BOTTOM:
Staircase made completely of prefabricated elements, the flights are extended to include the landings, support points with sound insulation layer, stair is separated from wall elements. 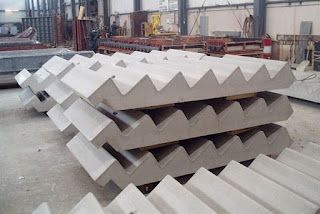