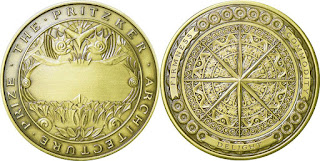 The Pritzker Architecture Prize is awarded annually "to honor a living architect or architects whose built work demonstrates a combination of those qualities of talent, vision and commitment, which has produced consistent and significant contributions to humanity and the built environment through the art of architecture". Founded in 1979 by Jay A. Pritzker and his wife Cindy, the award is funded by the Pritzker family and sponsored by the Hyatt Foundation. It is considered to be one of the world's premier architecture prizes, and is often referred to as the Nobel Prize of architecture.

The prize is said to be awarded "irrespective of nationality, race, creed, or ideology". The recipients receive US$100,000, (79,29,880 Indian Rupee) a citation certificate, and since 1987, a bronze medallion. The designs on the medal are inspired by the work of architect Louis Sullivan, while the Latin inspired inscription on the reverse of the medallion—firmitas, utilitas, venustas (English: firmness, commodity and delight)—is from Ancient Roman architect Vitruvius. Before 1987, a limited edition Henry Moore sculpture accompanied the monetary prize.

The Executive Director of the prize, Martha Thorne, solicits nominations from a range of people, including past Laureates, academics, critics and others "with expertise and interest in the field of architecture". Any licensed architect can also make a personal application for the prize before November 1 every year. In 1988 Gordon Bunshaft nominated himself for the award and eventually won it. The jury, each year consisting of five to nine "experts ... recognized professionals in their own fields of architecture, business, education, publishing, and culture", deliberate early the following year before announcing the winner in spring. The prize Chair is Stephen Breyer; earlier chairs were J. Carter Brown (1979–2002), the Lord Rothschild (2003–2004), the Lord Palumbo (2005–2015) and Glenn Murcutt (2017–2018).