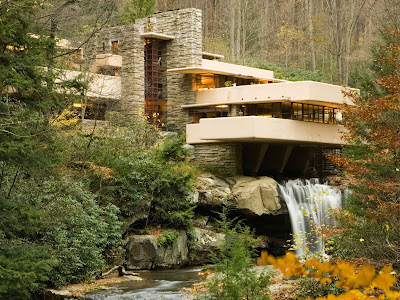 The house was built partly over a waterfall on Bear Run in the Mill Run section of Stewart Township, Fayette County, Pennsylvania, located in the Laurel Highlands of the Allegheny Mountains. The house was designed as a weekend home for the family of Liliane Kaufmann and her husband, Edgar J. Kaufmann Sr., owner of Kaufmann's Department Store.

Frank Lloyd Wright (June 8, 1867 – April 9, 1959) He was an American architect, interior designer, writer, and educator, whose creative period spanned more than 70 years, designing more than 1,000 structures, of which 532 were completed. Wright believed in designing structures that were in harmony with humanity and its environment, a philosophy he called organic architecture. This philosophy was best exemplified by Fallingwater (1935), which has been called "the best all-time work of American architecture." As a founder of organic architecture, Wright played a key role in the architectural movements of the twentieth century, influencing three generations of architects worldwide through his works.

Fallingwater was the family's weekend home from 1937 until 1963, when Edgar Kaufmann Jr. donated the property to the Western Pennsylvania Conservancy. The family retreated at Fallingwater on weekends to escape the heat and smoke of industrial Pittsburgh. Liliane enjoyed swimming in the nude and collecting modern art, especially the works of Diego Rivera, who was a guest at the country house.

Fallingwater was designed in two parts: the main house (5,330 sq.ft) and the guest house (1,700 sq.ft). It is centre around the fireplace, cut into by a rock which brings the waterfall physically inside. The natural surroundings incorporated throughout the house, such as the living room which includes steps that lead directly to the water below.

Dark and narrow passageways were designed to give a sense of compression that contrast in dramatic  style with the sense of expansion in the larger rooms. Wright designed the ceilings to be relatively low – only 6'4” in some places, to direct the eye to the outside. Externally, the chimney is extended upwards to make it the highest point on the house. Long cantilevered terraces made of reinforced concrete protrude in a series of right angles to add an element of sculpture as well as a strong horizontal emphasis. Wright allowed nature to determine the building's elements, including a trellis beam, bent to accommodate a pre-existing tree. The house uses a large amount of glass, with no exterior wall facing the waterfalls. Instead there is only a central stone core for the fireplaces and stone columns. Wright used 'corner-turning windows' without mullions to 'break the box of the house and cause the corners to vanish'. Despite suggesting that the house's concrete surfaces be coated in gold leaf, Wright only used two colours throughout the house – a light ochre for the concrete and a Cherokee red for the steel. This limited colour palette created a unified and organic composition.